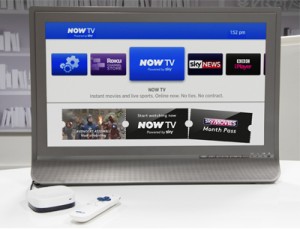 Sky has launched a low-price, internet-connected set-top box, so that customers of is Now TV service to access the OTT offering from their TVs.

The Now TV Box is a white label version of a set-top by internet TV firm Roku, with a customised interface, and will retail for just £9.99 (€11.57).

Available from today at NowTV.com, the device gives users contract-free access to the BBC iPlayer, the BBC News App, Channel Five’s Demand 5 service, Sky News, as well as Now TV and other web services like Facebook and Spotify.

Sky launched Now TV last year, giving users access to Sky Movies and Sports content without the need to sign up to a Sky TV contract. Its movies offer costs £15 per-month, following a three-month £8.99 offer, while sports access is priced at £9.99 per-day.

The Now TV Box launch comes after Sky made a further US$1.9 million equity investment in Roku in May, having previously made a US$10 million investment in the firm last July.

“Despite the explosion in connected devices such as Sky set-top boxes, games consoles and connected TVs, there are still up to tens of millions of regular TVs in the UK that cannot currently connect to the internet.  The Now TV box provides an affordable and simple way for any broadband-connected home to join the online TV revolution,” said Sky.

The news comes a day after Google launched a low-price TV dongle designed for people to stream web content to their TV set in the US, called Chromecast.