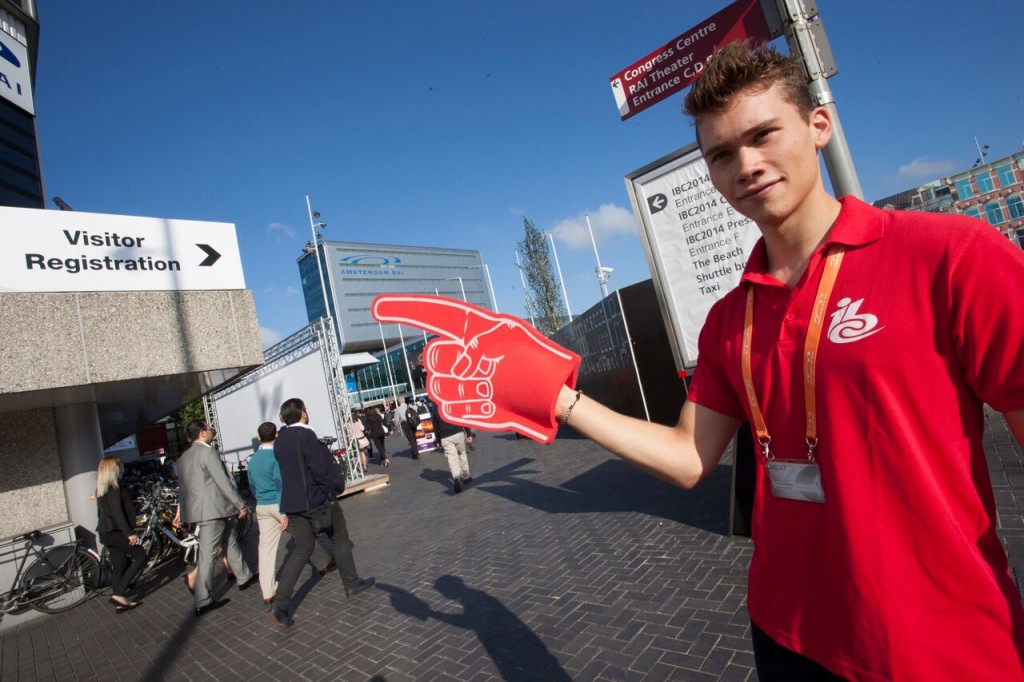 While hardly surprising, it was still a shock to hear that IBC will not be taking place in 2020.

The International Broadcasting Convention – better known as IBC – is the leading event for the TV industry. The Amsterdam event regularly attracts more than 50,000 attendees from all around the world and is an essential part of the calendar for companies looking to launch new products and generate business.

Rather than announcing a reduced version of the show with a limited capacity – as has been announced for IFA 2020 – IBC CEO CEO Michael Crimp said that there are “still many unknowns” and that it would be impossible to guarantee the delivery of “a safe and valuable event” that matched “the quality expected of IBC”.

This year will be the first time that IBC has not been held for over 25 years, with the event being an annual fixture at Amsterdam’s RAI since 1994.

Laurent Van Tornhout, VP product and marketing at Zappware, was one industry figure who was not surprised to see the event called off.

“It was totally in line with the in-country regulations we expected in The Netherlands,” he says. “We could all even easily do a copy-paste of the timeframe it took in China and conclude that large-scale international events would not be realistic at all in September 2020.”

This is a view shared by Monique Ware, chief marketing officer at OTT solutions provider Vewd. The company is a long time exhibitor at IBC and was braced for the news.

She notes: ”Given the rescheduling, cancellation and/or virtualising of most shows taking place the first half of this year, we knew the threat of IBC 2020 being cancelled, postponed or going virtual was a real one. We were just wondering when they were going to make a final determination to cancel or proceed.”

These candid comments reflect the results of a survey carried out by Digital TV Europe, in partnership with Vewd. 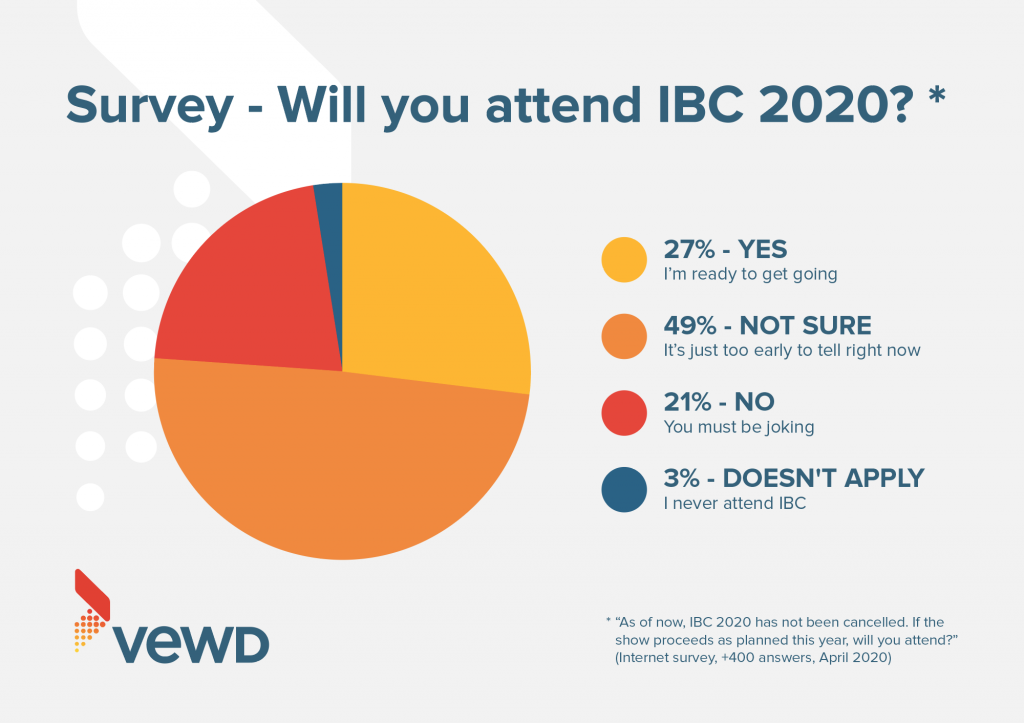 Prior to the show’s cancellation, we asked more than 400 industry figures about their views on the prospect of attending the show. When asked whether they would be prepared to attend, almost half said it was too early to say while a little more than a fifth ruled out the prospect of going outright.

Only a quarter of respondents (27%) said that they would have been prepared to attend IBC as planned.

Asking those who said that they were unsure, a large number of respondents aired concerns about whether their company’s travel ban would be lifted, nerves around the size of crowds and uncertainty about how well-attended the event would be given the current climate.

One anonymous respondent who had beaten COVID-19 boldly described themself as “a bit like Spider-Man, but without the skin-tight costume” and said that they were looking forward to the trams being quieter.

Charles Dawes, senior director of international marketing at TiVo, doesn’t say that the set-top box maker was planning on attending, but notes that “the safety of our staff, customers, and our community is our priority at this time.”

Vewd itself had previously pulled out of the event before it was even cancelled, with Ware saying “weighing the ROI of a smaller IBC against the health and safety risks to our employees left us with no choice but to cancel. Keeping our employees safe during the pandemic is of paramount importance.”

Zappware displayed a similar evaluation before the event was cancelled, Van Tornhout says.

“Doing live demos and having business discussions, would indeed induce risks and we would even bear a liability when, by accident, we would have customers or our own staff infected. It is obviously a commitment to exhibit in terms of budget and time,” he notes. “With the uncertainty of having an effective trade show and also considering the liability to maybe infect customers or our staff members, it would be difficult to justify attending as an exhibitor. Even the relevance of attending as a visitor wouldn’t make much sense.”

Picking up the pieces

With the event no longer going ahead the decision has been taken out of peoples’ hands – and has left the industry looking for alternative ways of showcasing itself.

“Cancelling IBC will have a major impact on the industry,” says Ware. “In a lot of ways, IBC is a marketplace that leverages economies of scale, aggregates industry announcements and advancements, and showcases brands in a contextual environment. Without it, brands are forced to construct parts of this exchange or eco-system on their own.”

Indeed, we have already seen vendors, distributors and broadcasters from all across the industry looking to digitalised events and showcases in an attempt to recapture some of that customer interaction. 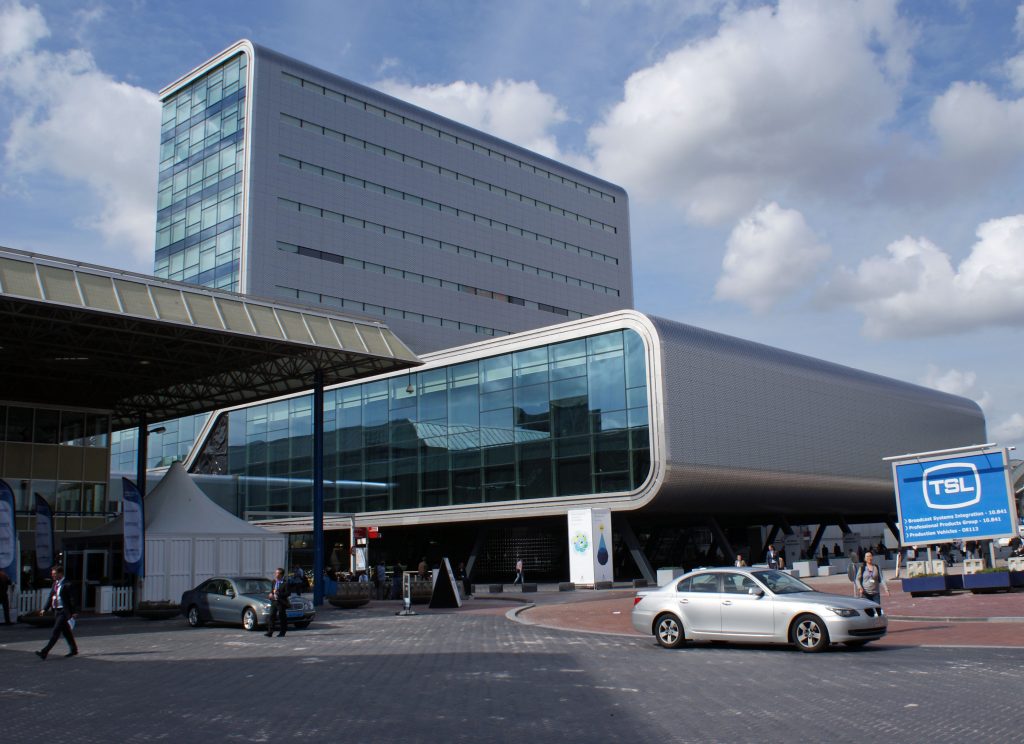 Marketers who would have based their entire strategies around the leading trade show are now looking to alternative ways of connecting with their customers.

Dawes notes that his marketing team at TiVo is “being creative” as it looks for “all opportunities to market ourselves and our product leadership in this ever-changing environment.”

This number of online events and launches will no doubt increase in the coming weeks and months, but many firms are staying the course with an already determined roadmap.

Zappware is one such company, says Van Tornhout. “We didn’t alter our own strategies: we support our customers to deploy the Zappware solutions according to plan and our developers were able to work from home to progress against the product roadmap as planned.”

This echoes the sentiments of Ware at Vewd, who says: “Our customers and partners depend on the timely delivery of our products and those will continue as scheduled. In light of so many event cancellations, we have changed how we market and promote our products and services, replacing trade shows like IBC with more virtual events and demos.”

In place of IBC, it is likely that the event organiser will look to run online sessions that would-be exhibitors can buy into, with Ware saying that Vewd would “certainly explore any relevant virtual events they produce.”

Though the show will not go on, the TV industry is still in the midst of a busy year of innovation that will certainly continue through the pandemic. There is now undoubtedly a huge gap in the collective calendar, but with the industry all in the same boat there will be a collective resilience and willingness to best the trials of coronavirus and return to Amsterdam renewed in 2021.