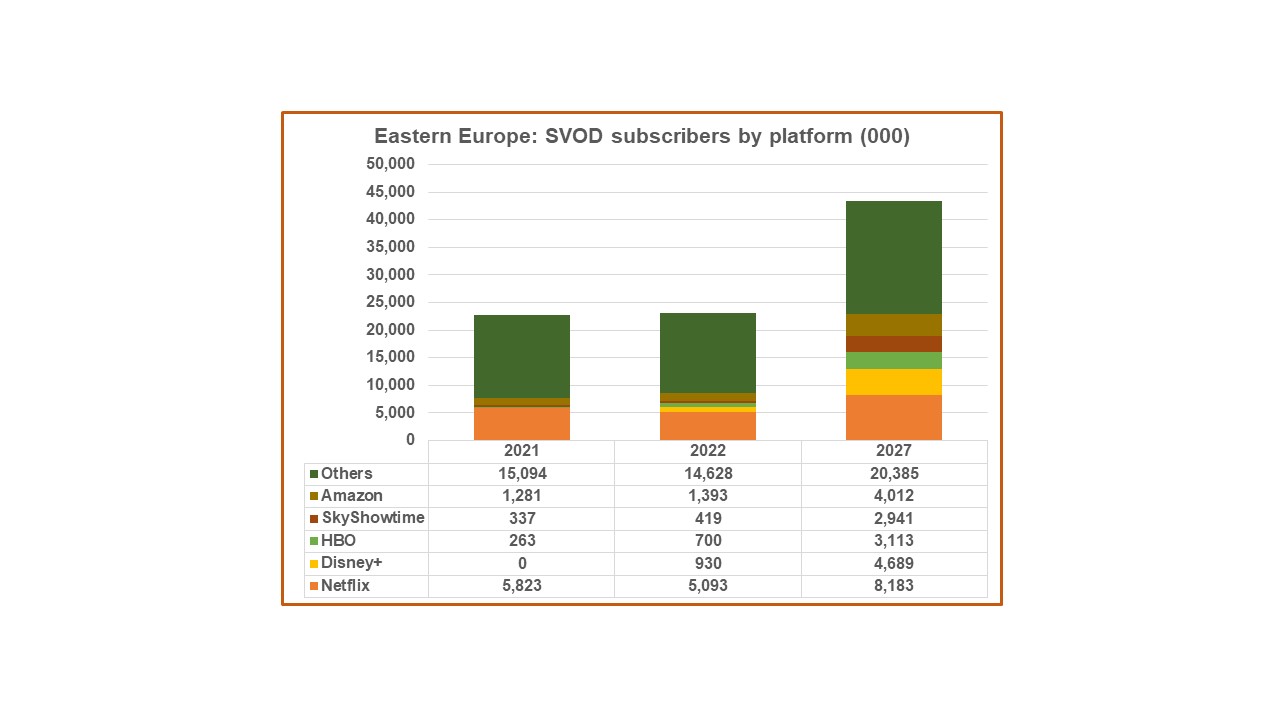 The Eastern European streaming market is set for explosive growth in the coming years, almost doubling in its number of subscribers.

According to Digital TV Research, the region will see its SVOD subscriber numbers increase from 23 million at the end of 2021 to 43 million by 2027.

The research firm attributes a significant amount of this growth to rollouts of major streaming services in the region including Disney+, the Sky-Paramount JV SkyShowtime and Warner Bros. Discovery’s HBO Max.

Despite recent stories of Netflix’s subscriber woes, the streamer will continue to lead the Eastern European SVOD sector with 8.18 million subscribers by 2027, up from 5.82 million at end-2021. Disney+, which is slated to launch in the region this June, is estimated to reach 4.69 million subs by 2027.

A major factor in Netflix’s Q1 struggles was its withdrawal from Russia, where it held 700,000 subscribers. The report predicts that western SVOD platforms which withdrew from Russia, including Disney+, are unlikely to make a return before 2027.

However, Russia is more self-dependent for content, meaning that overall subscriber figures are unlikely to be significantly impacted.

As such, Russia will remain a dominant force in the region in terms of overall subscriber numbers, though it will be overtaken by Poland in 2026 as leader. Between them, Russia and Poland will account for 64% of the region’s SVOD subscribers by 2027, down from 79% in 2021.

Murray added: “We assume that Russia will withdraw from Ukraine before end-2022. After the Russian withdrawal, we expect massive investment in Ukraine by Western companies/governments as well as most refugees returning home eventually. It will take some time to rebuild the economy and for homes to spend on entertainment.”