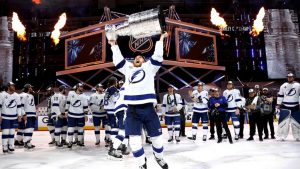 Nordic Entertainment Group (NENT Group) has signed a five-year exclusive media rights agreement with the US National Hockey League (NHL) to broadcast up to 1,400 live NHL games every season on the Viaplay streaming service in Poland until 2026.

The deal expands NENT Group and the NHL’s existing partnership to nine European countries, and reinforces Viaplay’s premium sports offering in Poland, with Premier League and Formula 1 to come in subsequent years.

NENT Group has also secured the exclusive rights to stream Swedish Hockey League (SHL) games on Viaplay in Poland until 2024.

Starting with the 2021/2022 season opener on October 12, viewers in Poland can watch all NHL regular season games live on Viaplay, including every NHL Saturday and NHL Sunday – formerly NHL European Game of the Week – game broadcast, with local language commentary for selected games.

Peter Nørrelund, NENT Group chief sports officer, said: “Our 18-year partnership with the NHL is one of our longest and most important. It showcases NENT Group’s ability to deliver premium sports to new and established fans, both in our Nordic and international markets. The NHL’s quality and drama, together with the successful careers of Mariusz Czerkawski and Stanley Cup winner Krzysztof Oliwa, have built a loyal Polish following. Viaplay viewers can now enjoy every NHL game as part of Poland’s best streamed sports offering.”

David Proper, NHL senior executive vice-president of media and international strategy, said: “Through our long and expanding partnership with NENT Group, we have been able to deliver our game to more fans in Europe than ever before. This arrangement with NENT Group will allow us to superserve our very passionate Polish fan base. We look forward to continuing to offer exceptional programming featuring the best players in the world to our Polish fans.”