US set for continued SVOD growth 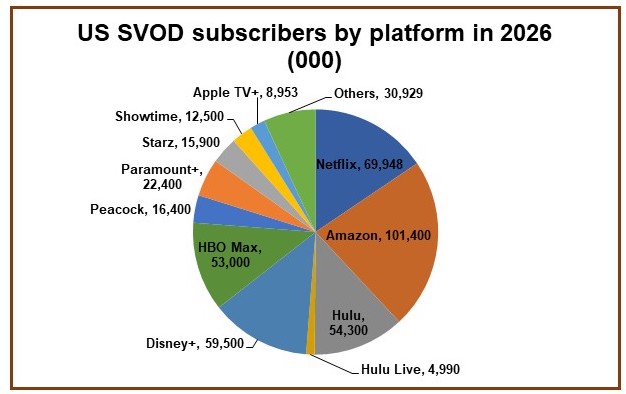 Streaming subscriptions in the US are set to approach half a billion in the next five years.

According to Digital TV Research, gross SVOD subscriptions [for movies, linear channels and TV episodes – excluding other platforms such as sports] in the US will climb by 33% from 338 million at end-2021 to 450 million in 2026.

Subscription stacking will also increase, with the average SVOD household paying for 4.26 platforms by 2026. This is an increase from 3.42 at the end of 2021.

Amazon will be the largest US SVOD player in terms of subscriptions with 101.4 million customers. Any mention of Amazon’s Prime subscription service however comes with the caveat that the majority of its customers sign up for the inclusion of expedited retail shipping and it is impossible to determine how many of that 100+ million actually stream Prime Video.

In terms of pure SVOD players, Netflix’s total of 69.9 million makes it the biggest in this regard but others are increasing in stature.

The report predicts that there will be three other streaming services that have more than 50 million subscribers by 2026. Those will be Disney+ at 59.5 million, Hulu at 54.3 million and HBO Max at 53 million.

Simon Murray, Principal Analyst at Digital TV Research, said: “We have substantially revised our forecasts to reflect recent market developments. For instance, we have markedly increased our subscriber numbers for Amazon Prime Video, HBO Max and the “others” category.”