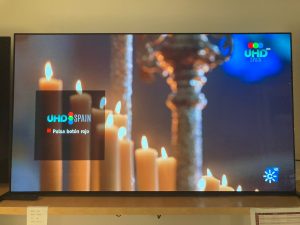 Viewers can tune their smart TVs to a digital terrestrial channel in their region and use the red button on their remote control to access via HbbTV live 4K content offered by UHD Spain across the country.

The hybrid access has been implemented in partnership with the Corporación Catalana de Medios Audiovisuales (CCMA).

UHD Spain transmission are also offered on unconnected DTT, satellite and the Internet.

Since June 15, live UHD programming has been transmitted from Mediapro’s studios in Barcelona, with around nine hours of unpublished content, provided by production companies such as Media Media, national television channels such as RTVE and regional broadcasters such as as RTVA, Aragón TV and CCMA.
Viewers can thus watch content provided by LaLiga, the movie El Abuelo, and documentaries on the Carnival of Cadiz, the Holy Week of Seville and El Rocío, among others.

The official website of UHD Spain is in charge of Internet broadcasting, in partnership with Ateme and Dolby.

UHD Spain member Dolby has meanwhile launched a service that demonstrates UHD with Dolby Atmos audio via HbbTV in partnership with Vestel.