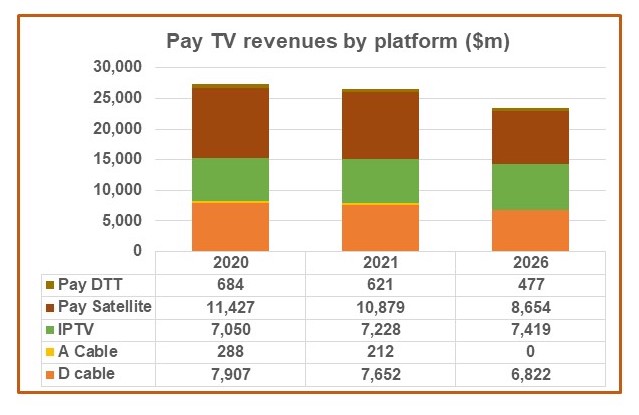 The total number of pay TV subscribers in Western Europe is set to fall to 103 million by 2026.

According to Digital TV Research, the market will lose 4 million subscribers as households continue to cut the cord in favour of streaming services.

Reflecting an increasing reliance on high-speed broadband, IPTV will be the leading platform by subscribers. IPTV will gain 4 million subscribers between 2020 and 2026 to reach 47 million, with overall revenues of US$7.42 billion for the region, up from US$7.05 billion in 2020. IPTV will be the sole platform of revenue growth over the coming half-decade.

IPTV will reinforce its position for subscribers, but pay satellite services such as Sky will still have higher revenues. Satellite will continue to dominate for revenue with US$8.65 billion, but this is significantly down from the US$11.43 billion generated in 2020. This is reflected in the fact that satellite TV will lose 5 million subs to hit 18 million in 2026.

Overall, pay TV revenues in Western Europe will decline by US$4 billion between 2020 and 2026 to reach US$23 billion. The pay TV subscriber count will drop by 4%.

Simon Murray, principal analyst at Digital TV Research, said: “European operators shifted their emphasis from premium TV to high-speed broadband delivery. This is particularly true in Denmark and Italy – which are at opposite ends of the pay TV penetration spectrum – where most operators promote OTT platforms ahead of traditional pay TV ones.”