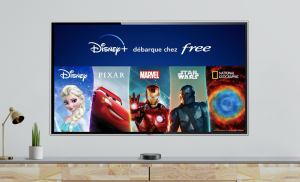 French service provider Free has added Disney+ to its TV offering, bring the latter’s originals and catalogue of films, series and documentaries, including titles from the Disney, Pixar, Marvel, Star Wards and National Geographic catalogues, to its viewers.

Freebox Pop and Freebox Delta subscribers can access the Disney+ offering directly via their set—tops and will benefit from free access to the service for six months included in their subscription. Disney+ will be available thereafter for €6.99 a month without an ongoing commitment.

Freebox mini 4K users can also subscribe to the service for €6.99 a month.

Free is the first French operator to integrate Disney+ content direct to the TV via its box.

The service is available via TVs connected to the Player Freebox Pop or mini 4K as well as to mobile devices including phones, tablets and game consoles. Subscribers have access to Disney+ on up to four screens simultaneously and can create up to seven different profiles per account, with some to be reserved to those over seven years in age.

Users can also download content from the service for offline viewing on up to 10 different mobile devices at any one time.

Disney+ launched in France on April 7 after a month’s delay due to the impact of the COVID-19 pandemic on broadband networks and a request by the French authorities not to overload them.