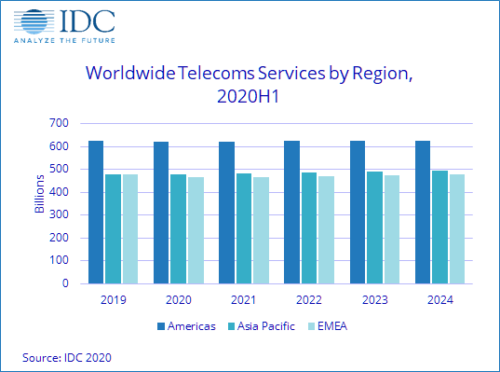 Better-than-expected results from operators in the APAC region will buoy global spend on telco and pay TV service.

According to new stats from the International Data Corporation (IDC), worldwide spending on pay TV and telecommunication services will reach US$1.57 billion in 2020, representing a decline of 1.1% as a result of the Covid-19 pandemic.

The results however are better than feared with forecast spending more optimistic than IDC’s previous results. This, IDC said, was due to solid performance in APAC, especially in China where the economy has recovered quickly.

Also driving this optimism is India, which saw “unexpectedly positive movement”. The Indian market, IDC said, still has a negative forecast, but its improvement has enhanced the outlook for the entire region.

The research firm has not made any significant changes to its forecast for EMEA or for the Americas, with a previously forecast slight decline on telco spending in these regions seemingly coming true.

The report said: “The introduction of new lockdowns in the biggest European countries, in our view, should not have an immediate impact on the telco market, because telco services have been secured by longer-term contracts.”

However, it added that a bigger decline in demand is not likely as many European governments have imposed additional measures which are aimed at protecting businesses and the population from the pandemic’s economic impact.