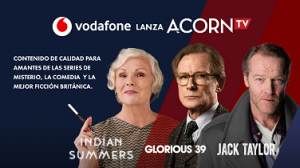 The AMC Networks-owned SVOD offering, which combines UK and international English-language content, will launch on Vodafone’s network on November 3.

As well as via set-top, Vodafone customers will be able to access Acorn TV via their other devices through the Vodafoine TV app.

Mathew Graha, CEO of Acorn TV, said: “Acorn TV has experienced an extraordinary success and we are delighted to be able to offer Vodafone TV customers some of the most emblematic and award-winning English-language series available internationally. Acorn TV has become the leading service specialising in its genre in the EU thanks to first-rate programming line-up, with productions from leading broadcasters like the BBC, ITV, Channel 4, ABC Australia and RTÉ.”

Ignacio García-Legaz, director of Vodafone TV, said: “Our goal of offering the best variety of titles is one of the hallmarks of our brand. Now we are continuing to enrich our offering of exclusive content with a new catalogue of British series that includes some of the most critically acclaimed titles that cannot easily be seen in our country.”

The streaming service launched in Spain as part of a multi-territory expansion at the end of 2018, available initially on the web and via iOS and Android apps and Roku streaming devices.