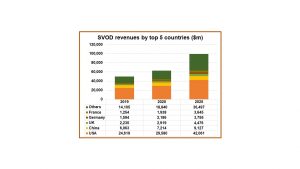 SVOD revenues for the planet’s top 138 countries will double by 2025.

By the mid-point of the decade, revenues derived from subscription video services will be at US$100 billion, twice the 2019 total of US$50 billion, says Digital TV Research.

The analyst notes that 16 countries will exceed US$1 billion in revenues by 2025, double from the eight which surpassed this landmark in 2019.

As the most mature SVOD market, the US will remain as the leader, adding nearly US$18 billion between 2019 and 2025 as streamers like HBO Max and Disney+ continue to grow. While 2025 revenues will be at US$42 billion, the US’s market share will fall from 49% to 42% as markets across Europe and Asia continue to mature.

One such rapidly maturing market is China, which will grow from US$6.1 billion in 2019 to US$9.2 billion in SVOD revenues by 2025. China, the second largest market, combined with the US will account for 51% of all SVOD subscriptions worldwide, down from 63% in 2019.

The UK will maintain its position in third, with SVOD revenues of US$4.5 billion – double the 2019 total of US$2.2 billion – while Germany will more-than-double to US$3.8 billion. French SVOD revenues will almost triple between 2019-2025 from US$1.3 billion to US$3.6 billion, no doubt correlating with the growth of native French streaming service Salto.

In terms of platforms themselves, Netflix, Disney+ and Amazon Prime Video will together control half the world’s SVOD subscriptions by 2025. Disney+ will grow the most, adding 142 million subs to a total of 172 million. Netflix meanwhile is expected to reach 263 million subscribers by 2025, adding 91 million.

The firm estimates that by 2025, a third of the world’s TV households will have at least one SVOD subscription – up from a quarter at the end of 2019.

Simon Murray, principal analyst at Digital TV Research, said: “We believe that Disney+ will have a huge impact. However, we have lowered our 2025 forecasts by 30 million since our May edition. Analysis of Disney’s June results showed a rapid deceleration in subscriber additions after an initial spike in its early launch countries. We expect this to be repeated elsewhere.”