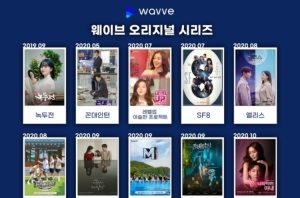 The milestone marks impressive growth for the streamer, which launched in September 2019 as a joint-venture of mobile carrier SK Telecom and terrestrial broadcasters KBS, MBC and SBS. The company has not said how the 10 million is broken down between paid and unpaid members.

Despite seeing a dip in users in Q1, Wavve has experienced solid growth since July, CEO Lee Tae-hyun has said. The exec attributed this growth to the releases of new originals and exclusive titles. The company has invested heavily in its originals and has acquired a large number of international series and movies.

The CEO said: “We are investing our proceeds back to content production to grow as a platform that can contribute to the growth of Korea’s media content industry. We will continue to make more aggressive investments next year to meet the expectations of users for our original content.”

Wavve said that it will release 12 new titles by the end of 2020, spread across drama, comedy and music concerts. These titles will also be distributed internationally, with the streamer earlier this year announcing a partnership with NBCUniversal that sees the mutual exchange of content between South Korea, the US and the UK.

The growth of this native streamer will be celebrated in South Korea at a time when US streaming companies are looking to expand in Southeast Asia. The territory is of particular interest to Netflix, which last month announced that it would look to build on its one million subscribers with extra investment in localised content and mobile-only plans.