Mulan PVOD gamble pays off for Disney with huge take 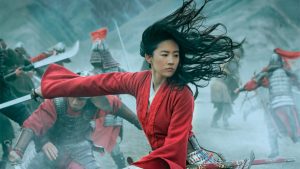 Disney’s decision to launch blockbuster movie Mulan as a PVOD purchase on Disney+ has reportedly paid off with over a quarter of US Disney+ subscribers forking out the extra US$29.99.

According to a report from Yahoo using figures from 7Park Data, 29% of US households that subscribe to the SVOD purchased the film between September 4-12. This rate of viewing puts it ahead of a number of other popular free titles on Disney+ like recently launched original movie Phineas & Ferb The Movie: Candace Against The Universe and family favourite Frozen II.

The report assumes that 50% of Disney+’s 60 million subscribers are based on the US and goes on to say that, based on this calculation, the film was purchased by 9 million users. This would, at US$29.99 per user, have netted the film US$261 million within that first week in the US alone. The report says that this is a conservative figure.

The report should put to bed any fears that Mulan has underperformed, as had previously been reported.

2017’s Beauty and the Beast is the standard bearer for Disney’s live action remakes, making US$174.8 million on its opening weekend domestically. By comparison, Mulan has performed very strongly to begin with – though it would be some feat if it were to come close to Beauty and the Beast’s total box office of     US$1.264 billion (it is, at writing, the 17th highest grossing movie of all time).

Disney will be even more pleased given that it will not share any of Mulan’s PVOD revenue with cinemas or even TVOD platforms like Amazon and Apple TV.

The decision to go down this route was offset against Warner Bros.’ insistence that Christopher Nolan’s comparable summer blockbuster Tenet was only made available in cinemas. Tenet has grossed US$207 million globally, but just shy of US$30 million in a US where COVID-19 is still rampant.

Disney CEO Bob Chapek said that Mulan would be a “one-off”, but its positive performance, combined with the poor box office for Tenet, may cause the company to re-think this strategy.

The latest Marvel movie, Black Widow, is set for a November 6 cinematic release and this will reportedly be further delayed, but a number of reports have suggested that Pixar’s Soul could go directly to Disney+.