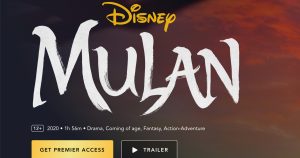 The film was initially scheduled for a cinematic release in March, but that was indefinitely postponed when the coronavirus pandemic forced cinemas around the world to shut. Theatres are now reopening across Europe and the US, but Disney made the bold call to launch the film in most markets on Disney+ at an additional cost.

The move was considered controversial by some critics for its high cost of US$29.99/£19.99 when compared to other films which have taken a similar route of skipping cinemas, and for the fact that viewers had to also be a paid Disney+ subscriber. Unlike many of those other films which have gone to streaming in lockdown, users are not restricted to a rental window and will have access to Mulan for as long as they are Disney+ subscribers.

The film has opened in cinemas in a number of markets where Disney+ is not available – particularly around Asia – and took in a total of US$5.9 million from Croatia, Czech Rep, Middle East, Slovakia, Turkey, Malaysia, Singapore, Taiwan, and Thailand.

However, Deadline, citing “rival industry sources with knowledge of PVOD”, reports that the film has performed poorly on Disney+. The outlet said that “Disney may not have earned great presales on Disney+ for Mulan.”

Disney has also said that it will drop the price tag in December, a move which may deter people from paying the fee now, and it has been speculated that it could go to third-party streaming platforms like Amazon and Google Play Store as a more typical rental soon.

For its part, Disney will have viewed Mulan as an experiment to gauge how receptive audiences are to the model, but CEO Bob Chapek has said that it is still committed to bringing its blockbusters to theatres.

Last month, the exec said: “We’re looking at Mulan as a one-off in terms of, as opposed to trying to say that there is some new business window we model that we’re looking at.

“That said, we find it very interesting to be able to take a new offering, our premier access offering to consumers at that $29.99 price and learn from it and see what happens not only in terms of the uptake of the number of subscribers that we get on the platform, but the actual number of transactions on the Disney+ platform that we get on that PVOD offering.”