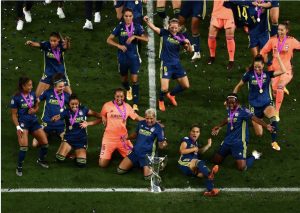 The match, which served as the full stop on a European football season which extended over 12 months, saw Lyon secure their fifth consecutive and seventh overall UEFA Women’s Champions League title in a 3-1 victory over European rivals and perennial competition runners-up Wolfsburg.

The match between two juggernauts of women’s European football was hotly anticipated across the continent, but no more so than in France, where Canal+ averaged 645,000 viewers and peaked at 786,000 – a record for the broadcaster.

In France the match was also shown on FTA TV channel W9 with an average audience of 1.09 million. This represented a 4.9% audience share for the Sunday night fixture.

Germany meanwhile saw a smaller, but still impressive audience on FTA network Sport1 with an average of 880,000 viewers and a peak of 1.28 million.

This year’s game was shown in close to 100 countries and was also available to watch on Uefa.TV, the over-the-top (OTT) streaming service launched by European soccer’s governing body last year.

Among the broadcasters that showed the match were BT Sport in the UK, NENT in the Nordic region, and CBS in the United States, while DAZN screened the game in Canada and various countries across Asia.

It is believed that the 2020 Women’s Champions League was the most accessible in the competition’s history, being broadcast by the likes of NENT Group across Scandinavia and by BT Sport in the UK. UEFA’s own OTT streaming service Uefa.TV, which launched this year, also offered the match in smaller markets where no local broadcaster holds the rights.