Despite cord cutting in advanced markets, pay TV is continuing to grow overall, driven by emerging markets and IPTV, according to Digital TV Research. 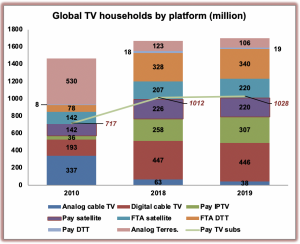 Digital TV Research estimates that pay TV subscriptions increased by 16 million to 1,028 million in 2019 across 138 countries. The growth is in emerging markets.

Digital cable numbers by contrast were stagnant, declining from 447 million to 446 million. Pay satellite numbers declined while free-to-air satellite and digital-terrestrial offerings increased their base.

Excluding analogue cable TV, digital pay TV has been significant over the last decade, rocketing from 380 million subscribers in 2010 to 991 million at end-2019.