Pay TV and SVOD revenues rise and rise in Germany

Both pay TV and subscription video-on-demand in Germany continued to make significant progress in 2019, with SVOD numbers almost doubling, according to a study by media industry association Vaunet. 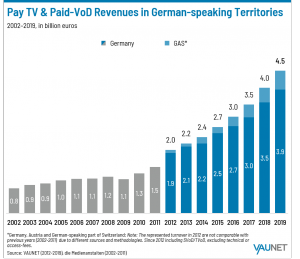 However, Vaunet said that the COVID-19 pandemic meant it was too soon to make predictions about growth this year, while the association’s managing director called for more government support for German production to recover from the crisis.

The number of pay TV subscriptions rose from 7.8 million to eight million in 2019, according to the Pay TV in Germany 2019-20 report. The number of pay TV viewers averaged 17.1 million over the first half of 2020, peaking at 18.3 million at the height of the coronavirus lockdown in March.

SVOD customers meanwhile numbered 13.4 million at the end of last year, almost doubling from the 6.9 million recorded in 2018.

Revenues from both pay TV and paid video-on-demand services grew from €4 billion to €4.5 billion across the whole of German-speaking Europe in the course of 2019, while revenues in Germany itself grew from €3.5 billion to €3.9 billion. Of the latter figure, €2.4 billion was accounted for by pay TV, up from €2.3 billion, while SVOD revenues grew from €1.1billion to €1.2 billion.

“The demand for high-quality TV and video content among the German population is enormous and has registered a further significant rise during the corona phase. But pay TV and VOD providers are also having to contend with the consequences of the economic shutdown. Restarting scheduled productions represents a particular challenge in view of coronavirus-related cancellation risks. By also setting up a default fund for TV productions, politicians could help make a difference in this respect,” said Frank Giersberg, managing director of Vaunet.