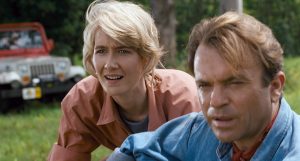 NBCUniversal’s Peacock streamer might have only launched this week, but the broadcaster is already starting to remove content.

The day after the A/SVOD launched, some major movies including Fast & Furious and Evan Almighty were removed, while a number of others are scheduled to go in the coming weeks.

Heavily involved in the advertising for the platform were the Jurassic Park and Matrix trilogies, but these are both set to be removed on July 31.

This is also the case for family favourite Shrek, apocalyptic drama Children of Men, adventure romp The Mummy and iconic horror title The Blair Witch Project.

Peacock is not alone here – a number of titles on WarnerMedia’s HBO Max suffered a similar fate within the first couple of weeks – but critics have panned the removal of such a large number of major movies so soon after the national launch.

Audiences have become more accustomed to the impermanent nature of streaming services, with Netflix being the prime example of a service where movies and series come and go on a regular basis. However, titles being removed from these streamers are normally licenced rather than being owned by the platform holder itself.

Given NBCUniversal’s refocus on the Jurassic Park franchise in particular over the past decade – it has released two new entries into the series since 2015 and is in the midst of building a multi-million dollar themed roller coaster at its Universal Studios theme park in Orlando – the removal of this trilogy is surprising.

Peacock’s free tier offers access to more than 13,000 hours of content including the Sky co-production Brave New World. Its premium offering, starting at US$4.99 per month (or free for Comcast customers) almost doubles that amount of content and adds live sports including 175 exclusive English Premier League football matches from the 2020-21 season, the US Open golf championship, Ryder Cup tennis, the Tokyo and Beijing Olympics and an NFL Wild Card Game.