Parrot Analytics: Dark a hit in the Netherlands 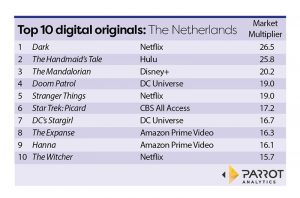 Netflix’s German-language original Dark continues to be a hit in Europe with the series topping Parrot Analytics’ originals in-demand chart for the week ending July 12 in the Netherlands.

Parrot Analytics analyses the demand for recent popular digital titles across international markets, based on the application of artificial intelligence to expressions of demand across social media, fan sites, peer-to-peer protocols and file-sharing platforms. In a recently updated format, the analyst now illustrates demand expressions based on how much more popular a charted title is than an average TV show.

The moody time travelling series culminated with its third and final season released on June 27 and has proved popular with Dutch viewers, with the show attracting 26.5 times the demand of an average show.

In second place is Hulu’s The Handmaid’s Tale, which has seen a resurgence in popularity. The dystopian drama drew demand that was 25.8 times that of an average show.

Rounding out the list is a pair of Amazon Prime Video originals – The Expanse and Hanna – in eighth and ninth respectively.