NENT’s Viaplay to merge with Elisa Viihde in Finland 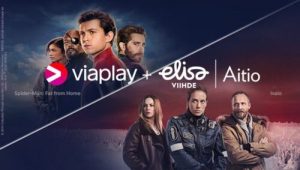 NENT and Finnish telco Elisa will launch a standalone service for Finnish viewers called Elisa Viihde Viaplay, which will launch in Q4. It will offer Viaplay’s original Nordic productions, Hollywood films and series, as well as Finnish films and original series from Elisa Viihde.

Both services will continue to operate separately until a date to be specified in Q4, when Elisa Viihde Viaplay’s combined content will be made available.

The two companies will continue to invest in content for the new service, with NENT Group also responsible for the service’s technology and analytics, while Elisa will handle sales, marketing and customer support.

Changes will start to be implemented from 30 June, with access to the service and Viaplay’s Films & Series package costing €12.99 ($14.70) per month. The Films & Series package had previously cost €9.99 while Elisa Viihde Aitio was charged at €9.90. The cost of a ‘Total’ package, including sports, remains unchanged at €34.99.

Anders Jensen, NENT Group president & CEO, said: “We continue to break new ground in streaming with the most innovative partnerships in the market. Elisa Viihde Viaplay will bring together the Nordic region’s leading streaming company and a Finnish pioneer in telecoms and digital services to take streaming to the next level in Finland – a country with one of the highest broadband penetration rates in the world.

“NENT Group has outstanding content delivered on a world-class technology platform, while Elisa is Finland’s market-leading communications service provider and has delivered a string of hit local drama formats. Elisa Viihde Viaplay is the perfect combination of our respective strengths – a standalone streaming service that will address the whole Finnish market and provide viewers with an even stronger and more diverse offering.”

Veli-Matti Mattila, Elisa CEO, added that the deal would enable his firm to offer customers “an exciting combination of high-quality content with a strong focus on Finnish and Nordic original series.”

Viaplay has more than 2.5 million paying subscribers across the Nordic region and has been rapidly expanding its originals output with shows such as Finnish original Cold Courage, while Elisa Viihde Aitio was launched in 2013 and has also been behind numerous shows of its own, such as Arctic Circle, All The Sins and Shadow Lines.