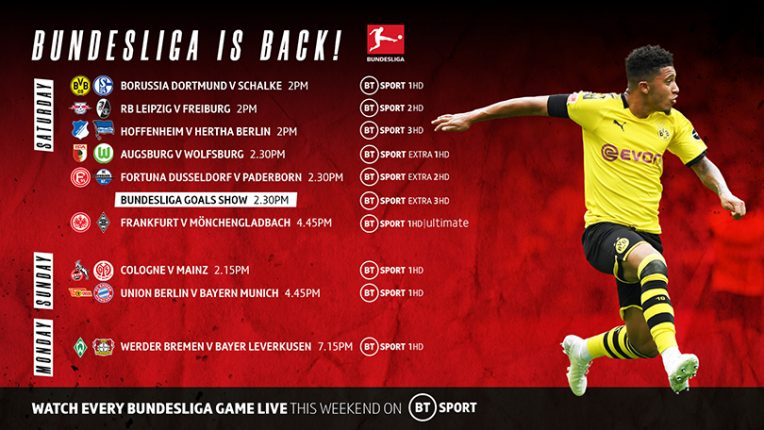 Following news that the German Bundesliga will resume after a 61-day hiatus, UK rights holder BT Sport has announced that it will broadcast all of the season’s remaining matches.

Starting with the Revierderby between Borussia Dortmund and Schalke at 2:30pm on May 16, BT said that it will broadcast every match for the remainder of the Bundesliga season, with at least one match per weekend available in 4K UHD on BT Sport Ultimate.

The broadcaster added that it will present live coverage from the BT Sport Studio in London with contributions from home by guests and commentators.

Simon Green, head of BT Sport, said: “It is great news for BT Sport customers that this weekend our customers will be able to watch live football. With the Bundesliga set to return on Saturday, we’re looking forward to bringing customers nine live football matches, including six live matches on Saturday afternoon, plus highlights, feature programmes and analysis.”

Speaking to SportBild magazine, Karl-Heinz Rummenigge – CEO of league champions Bayern Munich – said that he is optimistic about the league’s chances of striking a chord with football-starved audiences. He said: “With the Bundesliga as the only league to be broadcast on TV, I expect we will have an audience of a billion.”

Similarly, Movistar+ commentator Adolfo Barbero told RTE: “I can assure you that I haven’t seen this level of interest in the Bundesliga in 20 years. Normally people support Bayern Munich, Dortmund or even Bayer Leverkusen and that’s it, but now they are also looking forward to seeing Fortuna Duesseldorf and Paderborn. It’s crazy.”