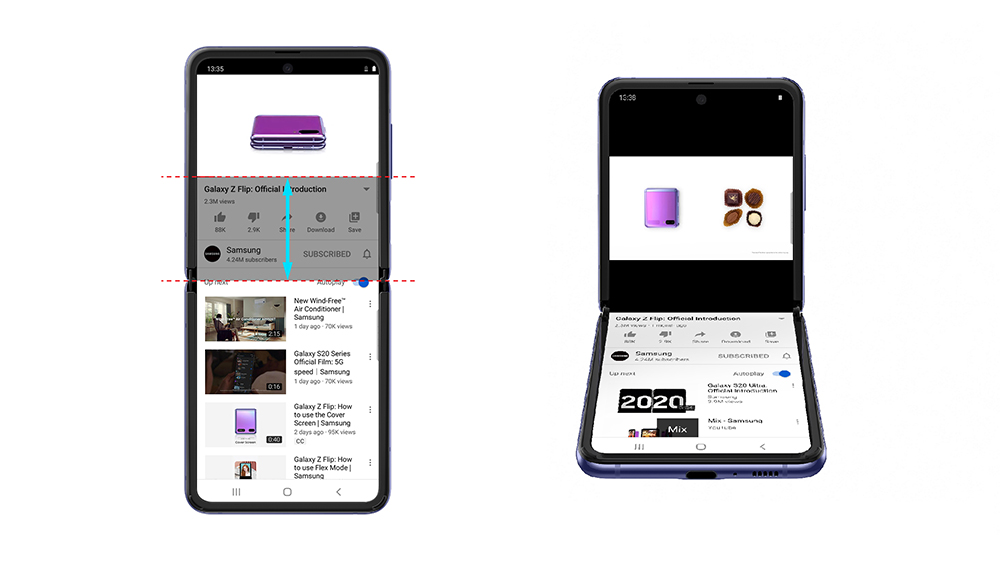 YouTube will get a new look exclusively on Samsung’s flagship Galaxy Z Flip phone, the Korean company has said.

As the title would suggest, the phone’s defining feature is its folding screen clamshell form factor and this is being taken advantage of with this new update for YouTube. The new feature, called Flex Mode, splits the user’s screen and allows them to watch a full-sized video in the top half while using the bottom half to access other aspects of YouTube, such as the video’s comments or explore the channel’s content.

Flex Mode is available on a range of Samsung’s first-party apps, but YouTube becomes one of the first from a third-party to take advantage of the feature.

Samsung said that it had worked with Google engineers to redesign the app “from the operating system level,” which includes integration of the Android Support Library.

Described by Samsung as “more than just a simple user experience upgrade”, users are able to adjust the way the video fits in the top half of the screen with square, vertical and 16:9 aspect ratio options.

As part of an ongoing relationship between the companies, Samsung has leveraged Google’s AI for its Live Caption feature which provides subtitles for any audio or visual content on Galaxy S20 phones. Samsung has also integrated Google Duo video calling technology that allows up to 12 people to join one video call.

Hiroshi Lockheimer, SVP of platforms and ecosystems at Google, said: “It’s been amazing to see Samsung continuously push the limits of what’s possible in mobile on the Android platform. Looking ahead, we’re excited to continue to work together to build the next wave of helpful, mobile innovation.”