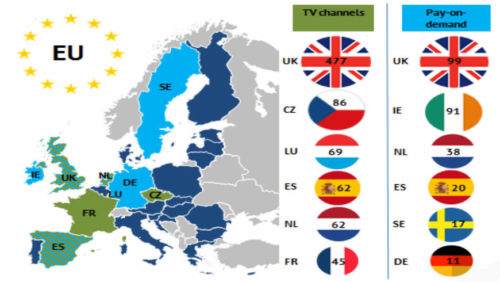 According to the European Audiovisual Observatory’s MAVISE database which charts the accessibility of TV channels and on-demand services across 41 European countries plus Morocco, there were a total of 11,418 TV channels available in the region. Of those channels, 4,757 were local TV.

The MAVISE database is updated annually and provides individual data for TV channels and video-on-demand services available in Europe including detailed information as regards targeting, ownership and licensing.

The UK had the highest number of local channels at 477, followed by the Czech Republic at 86, Luxembourg with 69 and Spain and the Netherlands with 62 each.

One in five channels established within the region were accessible via digital terrestrial TV, suggesting that pay TV operators still dominate the distribution of channels.

The report also found that more 21% of all TV channels based in the EU28 were specifically targeting other EU28 markets in 2019. That rises to 47% for pay on-demand services based in the EU.

Lastly, the report notes that almost two thirds (63%) of SVOD services were dedicated to the film and TV fiction genre.