Parrot Analytics: Stranger Things top of the class in Hungary

Netflix’s Stranger Things is the most in-demand show in Hungary, according to Parrot Analytics’ originals in-demand chart for the week ending October 20 in the country. 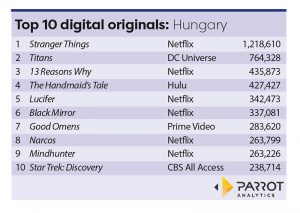 The list is largely dominated by Netflix, with 13 Reasons Why, Lucifer, Black Mirror, Narcos and Mindhunter all proving to be popular.

Samuel Stadler, VP of marketing at Parrot Analytics said: “With Netflix taking the lion’s share of global demand for its original series, it’s not surprising that in the second quarter of this year the service continues to lead in the drama genre for most markets.