Subscriptions now represent the vast majority of internet spending on TV and movies in North America, a new report has found.

According to research from Parks Associates, subscriptions to services such as Netflix and Hulu now make up 86% of online spending on TV and movies, up from just over half the total in 2012.

The shift in figures is confirmation of the industry’s move away from user content ownership, with viewers less inclined to purchase or rent movies and shows from digital storefronts like Amazon and iTunes.

It is also indicative of the amount of resources being invested in subscription-based OTT streaming offerings, with big-hitters like Disney, Apple and WarnerMedia imminently entering the space. 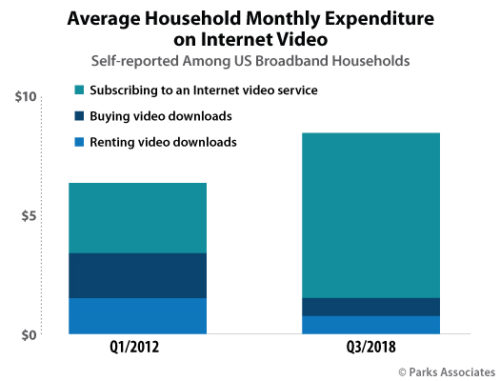 “While the US market is important for Disney, the company will ultimately measure the success of its Disney+ service on a global scale. AT&T likely sees its AT&T TV offering as the evolution of its core pay-TV business rather than as an extension of its vMVPD efforts. The Frndly TV is a niche play, targeting a specific group of consumers with a low price and family-friendly content.”

“The amount of money consumers spend per month will spike, at least in the short term, as new services such as Disney+ and Apple TV+ become available. Tradeoff decisions will come later. To keep consumers spending at this higher level, services will have to consistently deliver volumes of compelling content within an engaging user experience.”