Streaming viewing hours in the US grew by 130% in the year to June, with connected TV devices leading the growth, according to Conviva’s latest State of the Streaming TV Industry snapshot. 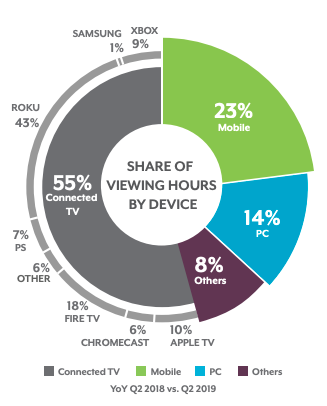 Conviva also found that viewers have diminishing tolerance for adverts that buffer or that last longer than 10 seconds.

Consumption on connected TV devices accounted for 54% of all viewing hours in the second quarter, and connected TV services improved their quality performance, with h 48% less buffering, 6% better picture quality, and 34% less video start failures than the year prior.

Roku dominated US connected TV viewing hours, with a 43% share compared to 18% for second-ranked Amazon Fire TV. Roku saw 173% growth year-on-year compared with 145% for Amazon Fire TV and 129% for Apple TV, which came third among connected TV devices with a 10% share.

Dallas was the top US city for streaming consumption relative to expected consumption by population size, followed by Atlanta and Phoenix. Among major cities surveyed, Boston, New York and San Francisco were at the bottom end of the rankings.

Conviva found that ad buffering kills user engagement. Pre-roll buffering for viewers that failed to watch more than 5% of an averaged 1.59%, compared with 0.4% for those viewers that passed the 5% mark.

Conviva also found that the number of videos posted on Facebook and YouTube grew by 15% in Q2. However engagement per video declined by 16% year-on-year.