SVOD subscriptions to approach one billion 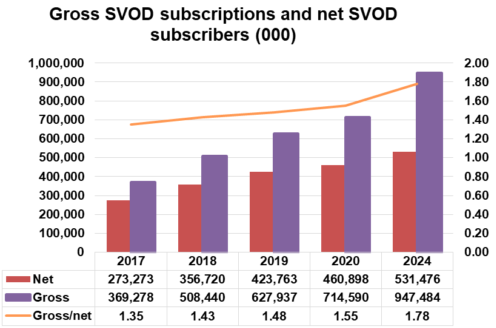 According to Digital TV Research, the global number of gross SVOD subscriptions will increase by 439 million between 2018 and 2024 to 947 million.

In its Global SVOD Forecasts report, the research outfit has assessed 736 platforms across 138 countries.

The research found that as the subscription total approaches 1 billion, net subscriber count will also rise by 175 million between 2018 and 2024, meaning that the average SVOD subscriber will pay for 1.78 accounts. This is up from 1.43 in 2018.

It also found that 15 countries will have more than 10 million SVOD subscriptions in the next five years, contributing to 86% of the total.

Newcomer Disney+ is expected to become the third place platform with a predicted 75 million subscribers.

The rest of the market will be made up of 255 million ‘other’ platforms of more localised and specialist offerings (such as the UK-only ITV Hub).

Simon Murray, principal analyst at Digital TV Research, said: “China overtook the US in 2018 to become the gross SVOD subscription leader. These two countries will continue to dominate the world stage. China and the US will together account for 59% of the global total by 2024. However, this proportion is down from 63% in 2018; indicating that other countries are growing faster.”