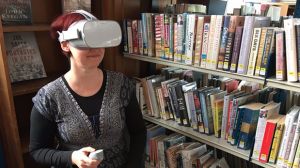 The BBC has announced a tour of British libraries to showcase its VR video content.

From early May to late July, the BBC will bring the BBC VR Hub to more than 40 local libraries across the UK. Members of the public will be able to try out experiences, with the hardware being supplied by the BBC.

This is a joint initiative with Libraries Connected, and Scottish Library and Information Council.

The tour will start in a number of libraries in Lancashire this week, including Tarleton, Skelmersdale, Eccleston and Adlington, before moving on to Nuneaton, Leeds, Dundee and others across England, Scotland, Wales and Northern Ireland.

Zillah Watson, head of BBC VR Hub, said: “Virtual reality is an extraordinary way to experience a story, by immersing yourself in it completely you get a huge connection to it. The trouble is that headsets are expensive, and only a very small number of people have them at home. That’s why we wanted to bring some of our favourite experiences out on the road, and by putting them into local libraries across the UK we’re hoping to give everyone the chance to try out virtual reality.”

The experiences on offer include; Congo VR,a three-part news documentary series about the Democratic Republic of the Congo presented by BBC Africa correspondent Alastair Leithead; 1943 Berlin Blitz,a film following the RAF on a bombing run during the Berlin Blitz, and; People Just Do Nothing VR, a short 360° adaptation of the BBC original comedy series of the same name

The full list of stops on the BBC’s VR tour can be found here.