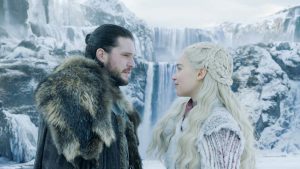 Global demand for the series on the day of Game of Thrones’ eighth season premiere exceeded the global premiere demand of every other TV series, including Game of Thrones’ own global season seven premiere day demand, for any season across all platforms and markets under measurement, according to Parrot Analytics.

Parrot Analytics partnered with Guinness World Records  to chart the demand for the premiere of the eighth and final season of Game of Thrones, awarding it the official title for Most in-demand TV premiere.

“Game of Thrones has amassed a per capita global audience demand of 25.46 on 14th of April 2019, its season eighth premiere day. Compared to its per capita global demand of 24.74 on the day of its season seven premiere, the latest and final season has premiered 2.9% higher globally. Premiere day demand has been particularly strong in the United States, United Kingdom and France,” said Samuel Stadler, VP of marketing, Parrot Analytics.

“It comes as no surprise. Game of Thrones has its fans tightly clenched in its dragon-like grip, and excitement for this final series has seen phenomenal engagement across every platform. It has broken records since it first aired – for its viewership figures, Emmy wins, and even its status as the most pirated TV show! And it looks like it’s going to continue breaking records right up to the final, undoubtedly devastating episode,” said Craig Glenday, editor in chief at Guinness World Records.