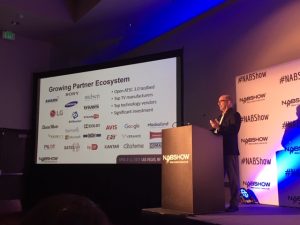 Work towards implementing the new US advanced TV standard, ATSC 3.0, has made some progress over the last year, with NAB Show attendees yesterday hearing about trials in Phoenix, Arizona, Cleveland, Ohio and Chicago, Illinois.

Peter Van Peenen, a consultant to channel group Pearl TV, provided an update on a key trial in Phoenix, Arizona that kicked off one year ago.

Van Peenen told NAB Show attendees that the trial had involved 12 Phoenix TV stations, including all Pearl stations in the area. The trial had encompassed elements such as integration with cable distributors, content protection, data-gathering and commercialisation opportunities such as addressable advertising and automotive distribution.

Van Peenen said the trial had been complex to set up, requiring agreements on spectrum to get stations up and running while making sure that all transmissions were coordinated.

He said that creating ATSC 3.0 service launch profiles had also required close work with OEMs. One of the issues, he said, was that manufacturers had “wanted us to narrow down [the specifications] and take out what we didn’t want to use at launch”.

Van Peenen said that setting up the trial had partly been “a matter of negotiation because we didn’t want to make it too hard for receiver manufacturers” to participate.

He said that there had been a strongly positive consumer reaction to advanced audio features enabled by Dolby AC-4 audio.