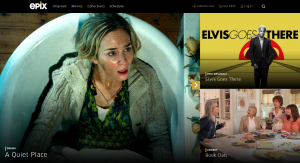 Roku and Amazon Fire TV subscribers will have access to all four Epix live channels and new features within the Epix Now app on supported devices. Premium programming in 4K Ultra HD is also available to stream on supported Roku devices and will be coming soon to Amazon Fire TV.

Epix Now subscribers will be able to watch original programming including Get Shorty, Berlin Station, Deep State, Elvis Goes There and PUNK as well as upcoming premieres of original series such as Godfather of Harlem, Pennyworth from Warner Horizon and DC, Perpetual Grace, LTD, from MGM, Belgravia and docu-series Slow Burn. Subscribers will also have access to Hollywood movies and classic film franchises.

Epix Now offers the Epix network’s full library of original programming, movies and other content for US$5.99 per month.

“Today’s announcement is part of an ongoing rollout of Epix Now, making our streaming service available to everyone no matter where or how they want to watch TV,” said Michael Wright, President of Epix.

“We’re excited to launch on the Roku platform and Amazon Fire TV and can’t wait for new audiences to get access to and catch up on our premium programming.”