TF1 ‘optimistic’ about Salto, teams up with Netflix for period drama 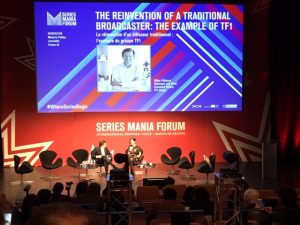 French commercial broadcaster TF1’s CEO Gilles Pélisson remains “optimistic” about the prospects for Salto, the subscription video-on-demand service JV between TF1, fellow commercial player M6 and public broadcaster France Télévisions, despite delays in getting the project off the ground.

Speaking at the Series Mania event in Lille yesterday, Pélisson said that the partners in the venture were convinced they could “create something that will be attractive for the public”.

Salto has been bedevilled by regulatory delays (see separate story) since the project was announced last year. Pélisson said that the project was still had to be examined French competition watchdog, the Autorité de la Concurrence, but said that the technical platform for the service was in place, thanks in part to the work of M6 within the RTL Group.

He said that it was also challenging to get a project involving three competitive groups up and running.

“It’s complex to have three actors in competition…cooperate,” he said.

Despite the delays, Pélisson said that “we have not lost too much time” and said he was confident that the service up quickly because a lot of the preparatory technical work had been done already.

Despite its commitment to Salto, TF1 is not abjuring cooperation with Netflix. The commercial broadcaster this week struck a deal with the streaming giant to pre-finance a major period drama project, Le Bazar de la Charité, a co-production between TF1 and Quad Télévision.

The financing agreement for the fin du siècle-set 8 x 52 minute series, written by Catherine Ramberg and Karine Spreuzkouski, directed by Alexandre Laurent and starring Audrey Fleurot, Julie De Bona and Camille Lou, will give Netflix exclusive SVOD rights for four years, including in France eight days after the airing of the final episode on TF1, and internationally the day after the first episode airs.

Pélisson said that the pair were “taking the risk together…and sharing in the success” of such a project and said that such deals were positive if the terms were transparent.