Deutsche Telekom teams up with EWE for fibre JV

Deutsche Telekom has struck a partnership agreement with energy utility and telecommunications provider EWE to create a joint venture to roll out fibre networks in Lower Saxony, North-Rhine Westphalia and Bremen. 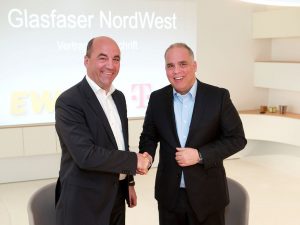 The new venture, Glasfaser NordWest, aims to provide fibre connectivity to up to 1.5 million homes and businesses across the three German federal states. All potential customers will be offered a FTTH connection and the pair expect to invest over €2 billion in the venture over a 10-year period.

Deutsche Telekom and EWE have previously signed a non-binding declaration of intent to collaborate in rolling out fibre, but they have now firmed up their plans. The two companies plan to register the JV in Oldenburg in Lower Saxony upon receiving a green light for the venture from the Bundeskartellamt, the German federal competition watchdog.

The pair will commission the building of the network through a competitive selection process, designating rollout areas in advance over the first two years of operation. Once the network has been deployed, Deutsche Telekom, EWE and other interested parties will compete for customers independently.

Dirk Wössner, chief executive of Telekom Deutschland, Deutsche Telekom’s domestic German arm, said that the setting up of the venture meant that the company would be able to connect homes that would otherwise have been uneconomic. He said that Deutsche Telekom would need to form partnerships to ensure the full digitisation of Germany and that the EWE JV showed that FTTH expansion without regulation was possible.

EWE CEO Stefan Dohler said that the new infrastructure would be available to third-party operators under normal commercial terms.