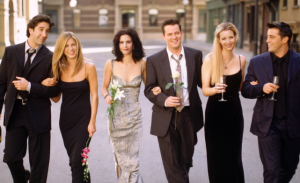 Friends, the hit sitcom that first ran on television between 1994-2004, has been voted as the most popular programme for five to 16-year-olds in the UK, according to a Childwise report.

The majority of 2,000 youngsters surveyed by Childwise voted the show as a favourite. The iconic 90s sitcom was picked in large part due to “the focus on friendships and relationships” which is relatable to teens, according the research group.

Almost 40% of the age group are using the internet when they are outside, as well as when they are at home, according to the report. Childwise says this connectivity is making them feel alone and isolated as a result, making the show which focuses on friendships appealing.

The researcher also thinks the shows resurgence is due to its presence on Netflix.

“They can watch it virtually whenever and wherever they like, from beginning to end in order and with ease, in a way that they couldn’t before it was on Netflix (when it was previously only on Comedy Central) unless they broke out their parents’ old DVD boxsets,” said Childwise research director Simon Leggett.

About seven in 10 of this age group had used Netflix in the week that they week questioned.

YouTube was the most used platform among the age group, followed Snapchat, said the research firm.

The broad appeal of Friends, and the fact that it can draw in audiences that may have not even been born while it was on terrestrial television, is one reason why Netflix shelled out US$100 million to keep the title on its platform at the end of 2018.