VOD subscriptions in MENA to more than double by 2024

Subscription video-on-demand use will more than double in the Middle East and North Africa (MENA) region, including Turkey, between 2018 and 2024, according to Digital TV Research. 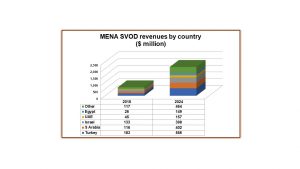 “We forecast 11.87 million SVOD subscriptions in the 13 Arab-speaking countries covered in this report by 2024 – nearly triple from the 4.13 million recorded at end-2018,” said Simon Murray, principal analyst at Digital TV Research.

In the 13 Arabic countries, the top eight platforms – Netflix, Amazon Prime Video, Icflix, Starz Play, Iflix, Wavo, beIN Connect and Shahid Plus – are due to retain 95% of SVOD subscribers.

By comparison, Turkey’s Tivibu is expected to have 3.14 million paying subscribers by 2024, with Turkcell adding a further 4.75 million. Netflix will continue to take third place in Turkey.

SVOD revenues across all of MENA are tipped to more than triple between 2018 and 2024 to reach US$2.13 billion. Turkey is expected to account for US$556 million of this by 2024, followed by Saudi Arabia at US$402 million and Israel with US$398 million.

Separately, Digital TV Research recently reported that pay TV revenues for 20 MENA countries declined 11% to just under US$3 billion (€2.6 billion) between 2016 and 2018, thanks to piracy, competition from OTT providers, falling revenue per user, and the Saudi-led ban on BeIN Media.

The research firm said it expects overall pay TV revenues across the region to be lower in 2024 at US$3.28 billion than they were in 2016, when they stood at US$3.36 billion.