Ampere: Netflix will ‘aggressively ramp up’ local production in Europe and Asia

Netflix will aggressively ramp up local production in Europe and Asia this year to drive up penetration and meet new content quota obligations, according to Ampere analysis. 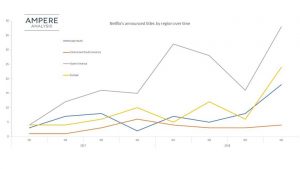 In a note on Netflix’s strategy, Ampere said that Netflix announced 24 new titles for Europe in Q4 2018, which is the equivalent to the streaming giant’s total for the region in 2017 and represents 22% of its upcoming catalogue.

Netflix has also said it will increase the number of European titles it produces by another third during 2019, having delivered 141 projects including recommissions in 2018. The streaming service also announced a rights deal with the Roald Dahl Company, with ambitions to produce a broad raft of children’s titles based on Dahl’s books. 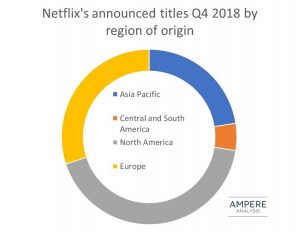 The UK contributed 10 titles to Netflix’s slate in Q4, with India contributing eight, Germany six and Japan and Spain contributing five each.

Ampere noted that central and South America appears to have taken something of a back seat in Q4, with the region only accounting for 5% of the Q4 slate – with only five titles announced ­– and 9% of the entire upcoming Netflix slate. However, the fact that Mexico is mulling the introduction of an EU-style quota of local content means that Netflix may have to review its strategy for the region in the future, says Ampere.

Fred Black, analyst at Ampere Analysis said: “Locally produced, local language content is key to Netflix’s current and continued success, and these figures underline how important that strategy will remain in 2019. But there are other issues too. Netflix is pushing hard to comply with incoming European Commission quotas that would set a minimum of 30% of streaming content to be European in origin, and European titles make up 29% of Netflix’s announcements this quarter. There is a possibility that we’ll see something similar in Latin America if Mexico introduces similar quotas as it has mooted. That may signal a change in production strategy.”