Recent moves by Belgium and Switzerland to shut down digital-terrestrial broadcast networks do not signal a decline in DTT distribution and terrestrial broadcasting in other EU markets remains robust, according to a study by public broadcasters organisation the EBU. 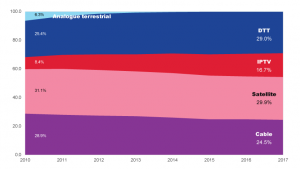 The EBU’s intervention in the debate around the future of DTT follows the shut-down of Belgian pubcaster VRT’s free-to-air DTT signals at the start of the month, although VRT channels remain available on the Antenne TV DVB-T2 pay TV platform.

Switzerland’s SRG SSR has also announced that it will close down digital-terrestrial broadcasting next year.

According to the EBU’s Media Intelligence Service, as of 2018, 29% of households in the EU 28 rely primarily on DTT for TV reception, translating to almost 60 million households versus the 200,000 affected by the decisions in Belgium and Switzerland, where cable is the primary TV distribution technology.

The EBU pointed out that DTT penetration in both Belgium and Switzerland had never exceeded 5%, and that cable and IPTV together have over 90% penetration across these markets.

The 29% of EU homes served primarily by DTT is comparable with the 31.7% served by terrestrial transmission – both analogue and digital – in 2010, when 6.3% of homes were still served by analogue transmission.