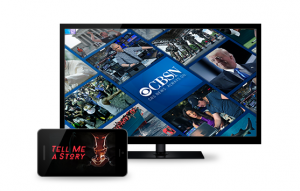 Australia’s Network 10 has teamed up with CBS to launch a version of the US network’s subscription video-on-demand service, CBS All Access.

The new service, 10 All Access, has launched with 7,000 episodes of content from CBS and 10 available to Australian viewers for A$9.99 a month, with the first month free for new subscribers.

According to 10, the service will offer exclusive original series, current and previous seasons of select CBS and 10 shows, classic TV series, as well as the ability to live stream CBSN, CBS News’ 24/7 streaming news service.

The content line-up for the service includes CBS All Access originals Tell Me A Story, One Dollar and Strange Angel, along with the first two seasons of The Good Fight.

Subscribers will be able to watch some upcoming shows the same day as they air in the US and before they air locally in Australia, including Happy Together, The Code, The Neighborhood and In the Dark, as well as new seasons of CBS hits like Hawaii Five-0, MacGyver, Man with a Plan and SEAL Team.

10 All Access is currently available on on iOS and Android mobile and tablet devices, Apple TV, Android TV, Chromecast, and online. Subscribers will be able to watch on three screens simultaneously and the service will be launching on additional platforms in the coming months, according to 10.

Network 10’s chief executive officer Paul Anderson said: “10 All Access gives us a fantastic new avenue to engage audiences with premium entertainment any way they want it. It fits perfectly into the 10 family alongside our broadcast channels, 10, 10 Boss and 10 Peach, our catch-up service 10 Play, and our news and entertainment site 10 Daily. We’ll continue to evolve 10 All Access with more great content to binge on and more product features to enhance the viewing experience. We are just getting started.”

CBS Interactive’s president and chief operating officer Marc DeBevoise said: “10 All Access brings thousands of episodes of CBS and 10’s leading programming to digital platforms, making it simple for fans looking for more of their favourite television content to get it in one easy-to-use, multiplatform service. We look forward to continuing to expand 10 All Access to additional platforms and bring TV fans even more of the programming they want to watch.”