US over-the-top television service Pluto TV has made its first move into Europe by launching on Sky’s Now TV platform in the UK. 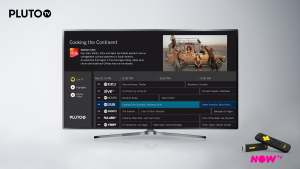 Pluto TV’s UK offering includes more than a dozen channels providing a range of entertainment, with further launches planned for the UK and the German-speaking markets “in the near future”.

“Our vision is to generate highly engaging viewing experiences and to offer our viewers a diverse yet customised experience on connected TV screens,” said Pluto TV managing director, Olivier Jollet.

“Pluto TV’s ad-funded model opens the door for advertisers to reach a digital first viewership not reached via classic TV advertising. At the same time, content producers who are not yet on television get the chance to shine on the TV screen.”

It is also carrying branded channels like Xive TV, World Poker Tour and Mystery Science Theater 3000, which is available exclusively in Europe via Pluto TV.

The channels, which are available live or via catch-up, can be accessed on the Now TV app or on the Now TV Smart Stick or Smart Box streaming devices.

Sky has been an investor in Pluto TV since 2014, shortly before the ad-funded service launched in the US, while Pluto TV’s European headquarters are based in Berlin.

Sky’s group director of business development and partnerships, Emma Lloyd, said: “We have been very impressed with Pluto TV’s development since our initial investment in the company four years ago.”

“I’m very excited the service is available for NOW TV customers giving them even more great content to watch and I’m confident Pluto TV will see similar success in the UK as they have in the US.”

In the US, Pluto TV now offers more than 100 channels, has over 120 content partners, and claims approximately 10 million monthly visitors. Stateside, it is available on a range of platforms and devices including iOS and Android, Roku, Amazon Fire TV, Apple TV, Chromecast and Vizio TVs.

“Pluto TV, as a young and successful American company, was immediately met with great interest in the US, recreating the classic TV channel guide while connecting with a digital first viewership,” said Jollet. “Now we want to reach out to the European audience as well.”

Pluto TV raised US$30 million (€27 million) in a funding round led by ProSiebenSat.1 Group, which also included participation from Scripps Networks Interactive, back in 2016.

As part of the deal, Pluto TV acquired German OTT service Quazer from ProSiebenSat.1, describing the Berlin-based service as “the German counterpart to Pluto TV”.

In a statement released at the time, ProSiebenSat.1 said that it invested a “high seven-figure sum” in the Los Angeles-based business, handing it an approximate 14% stake.

Last October, Pluto TV raised a further US$8.3 million in funding, with US$5 million coming from Samsung Venture Investment Corporation. It said it would  use the new funding to further expand its product, content and marketing efforts.

“The launch of Pluto TV in Europe is a monumental achievement as we actively pursue our mission of entertaining the planet,” said Pluto TV CEO and co-founder Tom Ryan, commenting on today’s announcement.

“Olivier and his team have worked tirelessly to develop and launch Pluto TV in the UK with the perfect mix of our unique channel offerings, content partners, and features, all adapted to meet the sensibilities and affinities of the local audience. This is an exciting next chapter for Pluto TV on a global scale.”