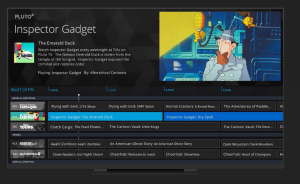 Over-the-top video service Pluto TV has raised US$30 million (€27 million) in a funding round led by ProSiebenSat.1 Group, which also included participation from Scripps Networks Interactive.

In a statement, ProSiebenSat.1 said that it invested a “high seven-figure sum” in the Los Angeles-based business, making it the largest strategic shareholder in Pluto TV with an approximate 14% stake.

As part of the deal, Pluto TV also acquired German OTT service Quazer from ProSiebenSat.1 – which described the Berlin-based service as “the German counterpart to Pluto TV”.

“Our goal has always been to be the global focal point for free TV via OTT, and this partnership brings us a big step further,” said Pluto TV CEO Tom Ryan in a statement.

“ProSiebenSat.1 Media combines equal power with digital expertise, making it the ideal partner to accelerate our market entry in Germany. In addition, the Quazer team in Berlin will strengthen Pluto TV and drive product innovation and international expansion of both offers.”

Scripps came onboard as a new investor in Pluto TV alongside return backers US Venture Partners and Sky Ventures and others.

Pluto TV is an ad-funded online TV service that offers more than 100 linear live channels and has partnerships with content providers including Bloomberg Television, Reuters, CBS and Paramount.

The company claims to reach more than 5 million active users per month and is led by co-founder and CEO Tom Ryan, co-founder and chief growth officer Ilya Pozin and executive chairman Kenneth Parks – who joined the company from Spotify last year.