Pluto TV raises US$8.3m in round led by Samsung 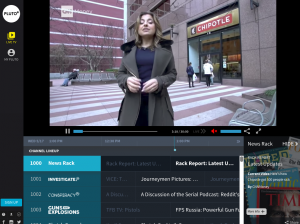 US online television service, Pluto TV, has raised US$8.3 million in new funding, with US$5 million coming from Samsung Venture Investment Corporation.

Pluto TV offers a line-up of around 100 live channels in the US and said it will use the new funding to further expand its product, content and marketing efforts.

“Their investment in Pluto TV is a great vote of confidence in our mission to bring free Internet television to consumers everywhere.”

Samsung Venture Investment Corporation’s Jihong Kim said: “Pluto TV is the leading free Internet TV service in America and we see huge potential for the company as they scale their cutting edge offering to viewers around the world.”

The funding caps a year of growth for Pluto TV, which has announced more more that 40 content partnership deals in 2017 with the companies including Warner Bros, Lionsgate, MGM, Bloomberg, Al Jazeera English and  Cheddar.

The company is headquartered in Los Angeles and has offices in Berlin, New York City, and Silicon Valley. Pluto TV is backed by companies including ProSiebenSat.1 Media, Scripps Networks Interactive and Sky.