Global OTT revenues to more than double between 2017 and 2023

Global over-the-top (OTT) TV and movie revenues will more than double from US$53 billion in 2017 to reach US$129 billion in 2023, according to Digital TV Research. 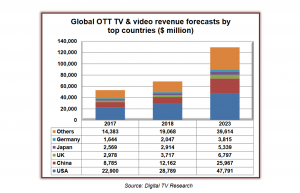 The top five of the 138 countries covered by the research are expected to represent 69% of worldwide revenues by 2023, down from 73% in 2017, while the US will remain “the dominant territory by some distance.”

China is tipped to almost triple its revenues over the forecast period to reach US$26 billion in 2023, with its share of the world’s OTT revenue to account for 20% by this date.

In 2023, the UK is expected to be the world’s third OTT market with revenues of US$6.8 billion, followed by Japan at US$5.3 billion and Germany at US$3.8 billion.

Subscription video-on-demand overtook ad-supported VOD as the largest OTT revenue source in 2016 and is expected to increase its share of the market from 47% in 2017 to 53% in 2023, reaching US$69 billion.

“Despite losing market share to SVOD, there is still plenty of growth left in the AVOD sector,” said the report. “AVOD revenues will increase by US$27 billion between 2017 and 2023 to take its total to US$47 billion (36% of total revenues).”