Netflix and Amazon accounted for just 5% of the Turkish subscription-video market in 2017 in terms of subscribers, placing them behind a number of Turkish players, according to IHS Markit. 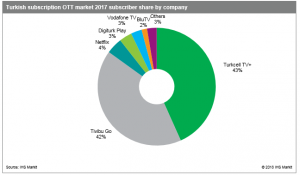 “Many local operators are capitalising on their position as media and access technology conglomerates, to provide their OTT media services as part of larger bundles and reducing the price of these services to next to nothing,” according to the research note.

Much like Now TV in the UK or DirecTV Now in the US, IHS said that these bundled virtual pay TV services offer first- and third-party channels, both live and on-demand – though at a discounted rate or on an exclusive basis to existing customers of the operator.

“Having claimed the majority of the market, these local players have left Netflix and Amazon with little room,” said the research. “Despite localising the service in November 2016, Netflix has been unable to readily draw in Turkish consumers to the platform, owing to its relatively high cost and a relative lack of Turkish original content.”