HTC has broadened support for its Viveport app store and subscription service from its own Vive devices to also include the Oculus Rift. 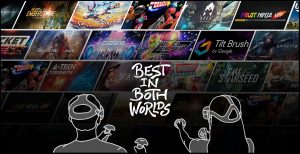 Oculus users are now able to download and purchase hundreds of games and apps from the Viveport store to use with their Rift headset, and can become Viveport Subscriber members.

HTC claims that Viveport has a curated library of more than 1,400 VR titles. Roughly 500 of these are available as part of a Viveport subscription service, which lets users choose five titles a month.

As of this week, HTC said over 200 titles have “tested favourably” for compatibility with the Oculus Rift.

“We are just getting started on supporting Oculus Rift owners and look forward to continue adding content to the Viveport line-up.”