The number of US subscribers to over-the-top delivered pay TV services like Sling TV, DirecTV Now and YouTube TV grew by 119% year-on-year to 6.73 million in Q2, according to Strategy Analytics. 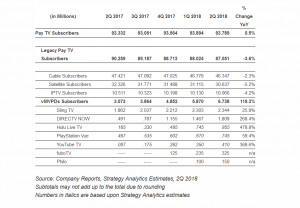 The research firm’s second quarter US pay TV update said that while the entire virtual multichannel video programming distributor (vMVPD) market is growing, AT&T’s DirecTV Now deserves “special notice” due to its rapid growth in a short period of time.

“If it continues on its current growth trajectory it will overtake Sling TV as the largest vMVPD in early 2019,” said Michael Goodman, Strategy Analytics’ director of television and media strategies.

According to the report, Sling TV had 2.34 million subscribers in the second quarter, up 25.9% year-on-year, while DirecTV Now came second in the vMVPD space with 1.81 million subscribers, up 268.4% compared to the same time last year.

Despite the gains made by these providers, the overall US pay TV market – including cable, satellite, IPTV and vMVPD – fell to 93.78 million subscribers across 27 providers, which accounted 97% of the market.