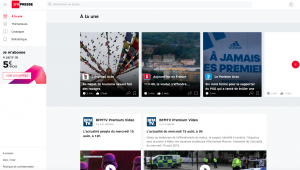 RMC Sport, which recently launched a new six-channel line-up of TV service, has been available on the portal since the Ligue 1 Conforama and English Premier League seasons kicked off five days ago.

Altice said that the launch was in line with the ambition for RMC Sport to become a 360° platform across radio, TV and digital.

News channel BFMTV will provide exclusive programmes for the site daily along with pictures and other content.

SFR Presse is available for €5 a month to subscribers. A new version of the portal, which has been available for two years with a catalogue of 80 press titles, was launched in July.