Netflix’s Spanish-language originals featured prominently in Parrot Analytics list of the most ‘in demand’ digital originals in Spain for the week ending August 12. 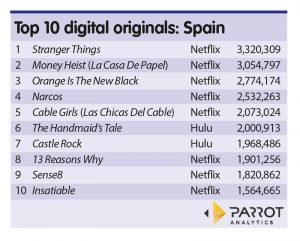 Narcos, the Colombia-set drug-trafficking drama that will move to Mexico for its upcoming fourth season, which is filmed in Spanish and English, came fourth in the list with an average 2.53 million demand expressions, while Spanish period comedy-drama Las Chicas del Cable took the number five slot with 2.07 million.

The only non-Netflix titles in the top 10 were Hulu’s The Handmaid’s Tale, the second season of which was distributed on HBO España after the first aired on Antena 3, taking number six slot with two million demand expressions, and Hulu’s Castle Rock, which airs on Telefónica’s Movistar+ in Spain and which took number seven slot with 1.97 million.

The other titles in the top 10 were Orange is the New Black, 13 Reason Why, Sense8 and Insatiable.