US SVOD subscriptions tipped to reach 208m in 2023

The number of video-on-demand subscriptions in the US is due to climb from 132 million in 2017 to 208 million in 2023, with Netflix and Amazon to retain their positions as the top two services. 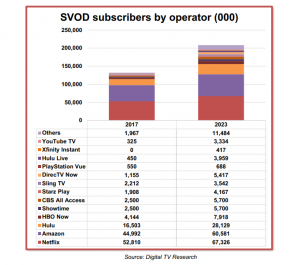 The report predicts that the average US subscription video-on-demand household will pay for 2.35 SVOD platforms by 2023, compared to 2.03 on average at the end of 2017.

“Our SVOD subscriber forecasts are gross. Many homes pay for more than one SVOD service. We believe that this proportion will rise as more platforms establish themselves.”