The BBC is set to release a BBC Proms virtual reality experience that will commemorate this year’s World War One centenary. 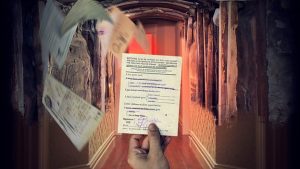 Nothing to be Written is due to premiere on August 21 and is the BBC’s first VR Prom. The seven-minute experience is a contemporary response to the First War World and takes the ‘field postcard’ as its inspiration.

The experience was produced by the BBC’s VR Hub and art and technology collective 59 Productions and is set to a score by contemporary composer Anna Meredith. The spatial sound recording and mix comes from the BBC’s Audio Research & Development team.

“This extraordinary piece is a brilliant example of the BBC’s cutting-edge work in virtual reality,” said Zillah Watson, commissioning editor, BBC VR Hub. “It’s the most exciting new technology in media today, and we’re using it to give viewers a new perspective on music and art with the BBC Proms.”

Lysander Ashton, Director of 59 Productions, said: “Nothing to be Written has been such an exciting artistic commission from the BBC. It’s always fascinating exploring the possibilities of VR, as a nascent medium, which seems to invite a mixture of filmic and theatrical approaches.”

Nothing to be Written has been developed for Oculus Go and will be available on public release to other major VR and BBC platforms later this year, after its debut at Imperial College Union as part of the BBC Proms programme later this month.

The experience was co-commissioned by the BBC Proms, Edinburgh International Festival, and 14-18 NOW – the UK’s arts programme for the First World War centenary. It will travel to 14-18 NOW-linked events throughout the Autumn and also receive its international premiere at Raindance Film Festival.