Netgem TV launched in UK with Freeview Play and Amazon 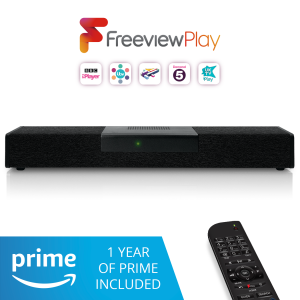 Netgem has launched its Netgem TV offering in the UK, featuring content from partners including Freeview Play and Amazon Prime Video.

Netgem TV, which aggregates a range of content, providing access to ‘skinny bundling’ offerings and other services, is currently available on Netgem’s own branded devices, including its recently launched SoundBox device.

In addition to the UK free-to-air players from broadcasters the BBC, ITV, Channel 4, Channel 5 and UKTV, the service includes Amazon Prime Video, Rakuten TV, Hayu, Hopster, Trace TV and others, although Netflix is absent.

The service is available via two new devices – the NetBox HD and the SoundBox HD, which includes a soundbar audio system with dual built-in woofers.

In the second half of this year, Netgem will release NetBox 4K and AirPlay and Dolby Digital support, and will launch the SoundBox 4K with additional microphones to enable voice control without the need for a separate Alexa device.

Later this year, Netgem plans to make its TV service available on manufacturer partner devices other than its own.

In addition to retail, Netgem is pitching its TV service in the UK to smaller service providers that are looking to integrate TV as part of a multi-play offering. At a press event yesterday evening in London, Netgem CEO Sylvain Thevenot said that launches with the first operators to sign up, including iTalk and PureFibre, were in progress.

Netgem had earlier revealed plans to market SoundBox 4K with Alexa voice control in France. It launched the SoundBox HD via the Amazon website in the UK in May, including a year’s subscription to Amazon Prime, for £249 (€282).